The time has come to get your tickets! THE LION KING is finally back for winter, 2022 and fans everywhere are so excited! cancel any plans you have for the biggest night in February, the kids won't believe their luck! This time around THE LION KING will be playing at the stunning and iconic Minskoff Theatre, Manhattan, New York, always seen as the premier venue in the city. Write Tuesday 22nd February 2022 down in the planner and purchase your tickets today, they'll be gone in a flash! Simply click 'get tickets', you wont regret it! 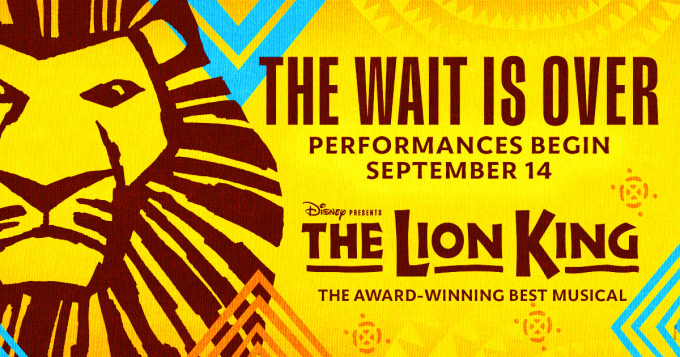 Experience the stunning artistry, unforgettable music and exhilarating choreography of this musical theatre phenomenon right here at Minskoff Theatre in Manhattan on Tuesday 22nd February 2022. The Lion King is a dramatic coming of age story. The young Simba a Prince among animals, spends his days in the sprawling Savannah watching his father, Mufasa the King of the jungle, while doing as little as lionly possible. But Tragedy strikes when Simba’s evil uncle, Scar, assassinates Simba’s father! Simba flees into the jungle leaving everything and everyone he’s ever known behind. How will our young Prince survive out in the Badlands? What will become of his great kingdom? Well, grab your tickets to the Lion King at Minskoff Theatre to find out! Newsday called it “A jaw-dropping magnificent spectacle”, and it truly is one of the ultimate shows ever! Since opening on Broadway in November 1997, THE LION KING has become the most successful musical in history, winning over 70 major theatre awards including the Tony Award for Best Musical, the Drama Critics Circle Award for Best Musical and a Grammy for Best Musical Show Album. This truly is a theatre production phenomenon, and you absolutely have to see it for yourself!